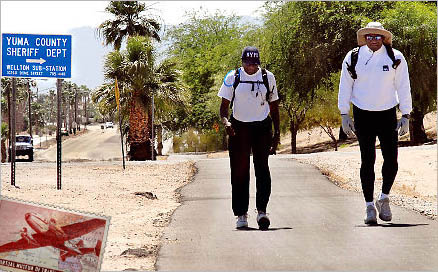 George Martin was awarded the Heisman Humanitarian Award in 2007. Martin anchored the NY Giants defense as a defensive end from 1975-1988. He served as co-captain of the Giants' Super Bowl championship team in 1986, as well as President of the National Football League Players Association (NFLPA). Following his career as a professional football player he went on to become a successful business executive and humanitarian.

On September 11, 2001, Martin lost friends in the attacks. In the aftermath of 9/11, he learned about the thousands of the rescue and recovery workers from all 50 states that were suffering from various health related issues due to the hazards they faced while serving at Ground Zero. To help those workers, Martin founded and directs a Journey for 9/11 to raise awareness about and funds for their medical monitoring and treatment. In September 2007, Martin began a charitable cross-country walk from the George Washington Bridge in New York City to San Diego, CA. He finished his walk on June 21, 2008, and touched thousands of lives along the way. In total, Martin walked through portions of 13 states and Washington DC, wearing out 27 pairs of sneakers and 413 sets of socks. Martin lost 41 pounds during the 3,003-mile walk, while gaining countless friends and supports along the way.

To date, Martin has raised more than $2 million for the treatment of ailing Ground Zero workers. Hackensack University Medical Center (N.J.), North Shore-Long Island Jewish Health Systems and the Mt. Sinai Medical Center are matching in medical services all donated funds from the Journey. Although Martin completed the walk, the mission is still ongoing. The ailing heroes are still in need of more funds for treatment, and Martin's charitable initiative continues.
http://heisman.com/roster.aspx?rp_id=85