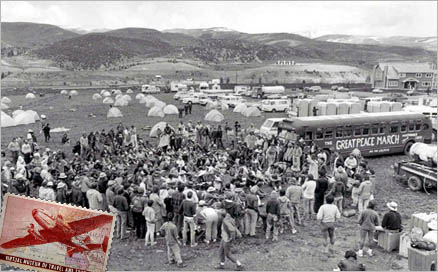 In 1986, about 1200 of us left Los Angeles to begin a nine-month march for disarmament--our destination Washington DC. PRO-Peace, a group formed by David Mixner, had planned the march, but expected 5,000 people to show. About two weeks into the march, PRO-Peace went bankrupt. Most folks went home, and the equipment was repossessed, as we fought the cold spring weather of the Mojave desert. The remaining 300-400 of us re-grouped, with lots of help, in the town of Barstow. Two weeks later we left Barstow, a new, humbler march, but a march nonetheless.

In November 15, 1986, we marched into DC, despite the predictions of our failure, almost 1200 strong again. About 15,000 people were there to greet us--many of those had helped the march or were inspired by it as we walked through their towns.