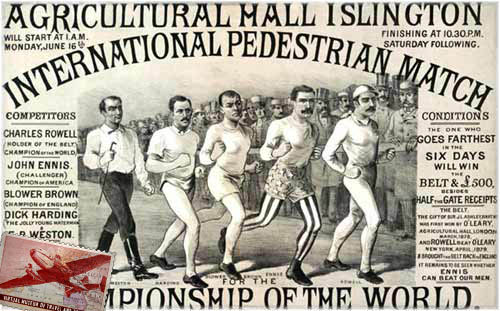 He is walking from New York to Minneapolis, a distance of 1,446 miles. He expects to make it in 60 day. He is 75 years old and has covered 100.000 miles in long-distance walk in his lifetime.

His greatest walk was in 1906, when he hiked clear across the American continent. Upon completion of his present walk Weston will lay the cornerstone of the new clubhouse of the Minneapolis Athletic club.

"They tell me I am 75 years old, but I don't feel it!" Edward Payson Weston, the father of long-distance walking, laughed as we were parting on the outskirts of New York, to where I had accompanied him.

"I begin this hike," he added, without training, but pride, principle and pluck will carry me through. And so, until 'Friday at Callicoon adieu."

Friday at Callicoon proved hot - HOT! The dusty, sun-baked road from Shoholo was shadeless. "Nary a tree to cover my unprotected head!" groaned Weston, the Walkist. He was resting for the moment on the hotel porch, his precious

feet carefully extended on a chair. "Time's up!" called some one from within. Another moment he and I were off for a full day's tramp together the center of a friendly, mildly excited crowd!

Callicoon had turned out en masse. Every man and woman not nailed to a bed or a cookstove was there. And as for children! Cheerful little girls romped along at his canehand and a neat file of boys sang as they followed the little man in khaki and leather putties until a wobbly sign post marked a boundary, and the cheering, breathless children were left behind.

Chipper as a boy of twenty, Weston strode forward with the springy step that so easily negotiates from thirty to sixty miles a day, according to the roadway. Wiry, muscular -one hand behind his back- he walked with a light steady pace, covering four and a half miles an hour. Knees bent, body forward, exerting a minimum of energy, the "Old Ped" who has covered 100,000 miles in forty years does not lift his feet high, but progresses with an odd shuffling step taught in the French army.

"Where did I get my remarkable endurance?" repeated the grizzled athlete. "Why, where most men get their best qualities -from my mother, who had as great a heart in her bosom as any woman who ever lived. It is for her sake that I never walk on Sunday. I promised her that I would not.

"A scrub woman started me walking, though! She had me discharged from my job as office boy and walked me out so fast that it got to be a habit.

"In New York and other big cities the average man walks a mile a day and he looks it! If I could induce worried and brain-weary men to walk more I should feel that I had averted more trouble than any man in the world. For instance, there would be no suicide if people walked enough nor other misery, for health means happiness.

"I walk to keep well," continued the white-haired septuagenarian, switching his "game leg" with his cane to stimulate circulation. "When you have led a careful life, age does not count. When I started to walk the hundred miles from Philadelphia to Manhattan the doctors said, 'Don't think of it. Don't try it. You are out of it.' " 'Out of what?' I asked. " 'Out of everything,' they said. You are too old, If you try to do that walk, your circulation will stop." 'Oh, will it?' said I. 'Well, we'll see.' And off I went. It was a mere matter of making up my mind and sticking to it. My circulation did not stop!

"More people die from under-exercise than from over-exercise. We are a non-walking nation, more's the pity. But it costs less fatigue and is less harmful to walk 100 miles in 24 hours than to run 100 yards in ten seconds.

"A brief stroll, say two or three miles, EVERY DAY, a little watchfulness in the simple things of life and some natural physical ability -that is all the preparation necessary for long-distance walking. Training is artificial and so harmful.

"The care of the feet is my chief concern. But blisters are discouraged by salt water, stiff muscles are rubbed flexible with oil -and there you are. "The doctors tell me I have a wonderful heart, a wonderful digestion and wonderful muscles. Well, I keep in good humor, sleep five hours a night and eat like a Christian -ONE

"Never taste liquor nor never smoke a cigar. As a tonic walking beats whisky. And the use of tobacco is a drug habit."

A farmer perched high on his creaking hay-wain called out jovially to Weston; the engineer of a click-clacking freight saluted the cross-country trotter with siren blasts; three "weary willies" cheered feebly as they watched the vigorous old man; a country woman came diffidently through a lilac-shaded gate to offer a cup of steaming tea into which she had dropped a raw egg.

"You asked my mother for this when you came by forty years ago," she said, shyly.

The kindness put new life into the aged athlete. A saving breeze made him spry once more. ''It beats all how they remember," said Weston, packing a handful of chopped ice under his sun-burned hat. The tireless legs strode onward to the last cross-road.

"Wait a minute. How do I look?" Want to go into town looking fairly respectable, you know" confessed Weston, unexpectedly producing a slender clothes brush.

At the town-line, with self-importance, the town constable fell into step with the unflagging Weston stride. "Two thousand steps to a mile -four miles to an hour- fifteen hundred miles from New York to Minneapolis," chanted a group of school children as they caught up to him. Through the gathering throng he strode, bowing right and left to the growing cheer of "Rah! Rah! Rah! Weston!

In November 1986 he completed the New York City Marathon, taking four days to complete the 26 miles (42 km) race. He "ran" across America on his hands, taking three years, eight months, and six days to travel from coast to coast and raise money for Vietnam war veterans. In 1988 at 41, he finished the Los Angeles Marathon, taking 74.5 hours to finish the 26.2 miles (42.2 km) race. He started the race a day earlier than everyone else and finished two days after the last runner had crossed the finish line.
Wieland was a guest on 100 Huntley Street.
On August 23, 2012, Wieland announced his plans for the Celebrate America Tour starting in January 2013. Over the next 5 years, his plans are to visit all 50 States in the USA, extending a challenge to do a measure more and inspire others! He will be speaking at conventions, corporate meetings, military bases, universities, high schools and churches.
https://en.wikipedia.org/wiki/Bob_Wieland 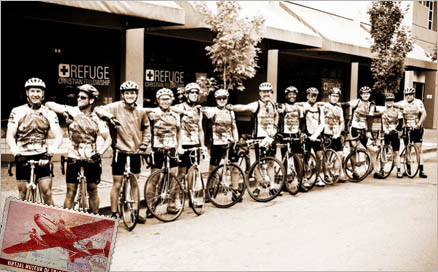