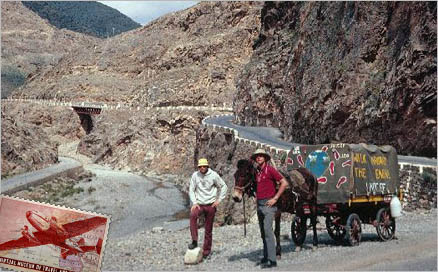 It took four years, 21 million steps and 22 pairs of leather shoes for Dave Kunst to complete his record-making and tragedy-marred 14,450-mile walk around the Earth in 1974.

With $1,000 and camping gear strapped to a mule named Willie Makeit, Dave and John Kunst had left Waseca four years earlier to find adventure -- and a place in the Guinness Book of World Records.

The brothers visited Princess Grace in Monaco, met Norwegian explorer Thor Heyerdahl and became the first non-Asians to walk through the Khyber Pass since Alexander the Great.

But in Afghanistan, one of the last countries in the trip, bandits shot and killed John.

Four months later, Dave resumed the journey with another brother, Pete, and returned to Waseca in October 1974.

Neither brother has spent much time in Minnesota in the past 30 years, but they are returning now for a celebration in Caledonia, in southeastern Minnesota, where they will unveil a sign at the northern edge of town honoring them for the around-the-world walk.

It's part of Caledonia's 150th anniversary festivities, which run through the weekend and include a parade with Dave, 64, and Pete, 59, as grand marshals.

"It's an education for the younger generation," said Irma Klug, a Kunst family friend and Caledonia resident for nearly 80 years. "They're very interested once they hear" about the Earth walk.

Born and raised in Caledonia, Dave Kunst moved to Pensacola, Fla., after eighth grade. He returned to Minnesota shortly thereafter, living in Caledonia and Owatonna before moving to Waseca, a south-central city of about 8,500 residents.

Married with three children, Kunst worked as a county surveyor while moonlighting as a projectionist for the Waseca theater. It was there in January 1970 that the idea for walking around the world was conceived.

The moon landing the summer before had sparked Kunst's interest in adventure. Then 30, he talked about traveling to the tip of South America or driving across the Australian outback.

But the theater owner challenged Kunst to do something no one else had ever done: Walk around the world.

Kunst got his brother John, a recent University of Minnesota graduate, to go along.

"John and I had never been anywhere," Kunst said in a telephone interview. "We were very naive on this. We spread a world map on the living room floor and tried to do a circle as much as possible."

The plan was to walk through the United States, Europe and the Soviet Union. They set a date -- June 20, 1970 -- and spent the next six months at the library researching the countries. U.S. Sen. Hubert Humphrey gave them a letter of recommendation; the mayor of Waseca suggested that they carry a scroll to be signed by officials at every stop. Before they left, a Minneapolis woman suggested that the brothers bring a mule to carry their gear and to show they were not hitchhikers.

"The scroll, Humphrey's letter, the mule -- that's what really made it for us," Dave Kunst said.

So on June 20, 1970, they started their journey, walking from Waseca to New York and then flying to Portugal, where they were given a second mule.

They walked through Spain, France and Italy, where they met Norwegian adventurer Thor Heyerdahl in a restaurant and told him of their plans.

He laughed and petted the mule.

Death in the foothills

The Kunsts were curiosities throughout the trip, giving interviews about what they were doing and about their quest to raise money for UNICEF, the United Nations children's fund.

In Afghanistan, a reporter erroneously wrote that the brothers were traveling with the donations.

At the foothills of mountains near Kabul, bandits shot Dave and John. John died along the road and Dave, suffering from a bullet wound in his upper chest, survived by playing dead. He spent 20 days in a hospital in Afghanistan before flying back to Minnesota, more than 6,000 miles shy of his goal.

After recuperating for 3 months, Dave Kunst decided to continue his trip. Pete accompanied him this time, and they flew to Afghanistan and began their journey from the spot where John was killed.

Dave kept with him a note John wrote while they were struggling through Turkey: "It's like a play. With all the actors playing their parts right up to the tragic ending."

Dave and Pete were denied access to the Soviet Union and China so they flew from India to Australia, where they touched the Indian Ocean.

"If we were to walk across the Soviet Union, we would only have walked the Northern Hemisphere," Dave Kunst said. "We actually really did circle the Earth."

They hit a few snags in Australia. Officials there wouldn't allow the mule into their country, so they got their third mule. Pete had to go back to work, so his journey ended in Australia. And the new mule died.

About to abandon his wagon, Dave met Jenni Samuel, a Perth schoolteacher who took the mule's place by towing the wagon from her car while he walked alongside.

After walking across Australia at 30 miles a day and touching the Pacific Ocean, he flew to California and began walking toward Minnesota.

He was in Iowa in 1974 when he told a Minneapolis Tribune reporter he "had no idea there were so many damn dumb foreigners in this world," that marriage was a bad idea and that he didn't think highly of Waseca.

"I'm doing this for myself mainly. I was tired of Waseca, tired of my job, tired of a lot of little people who don't want to think, and tired of my wife," Kunst said in the interview. "The walk was a perfect way to change all that: I just walked out of town."

He ended up divorcing his wife and marrying Samuel, who will be with him in Caledonia.

Kunst said he doesn't regret the comments he made 30 years ago, even though some Waseca residents, including the mayor, didn't show up when he made it back to town.

About 100 people are expected this evening for the unveiling of the sign that reads: "Caledonia: Birthplace of the Earthwalkers David, Peter and John Kunst."

The sign, which cost $6,500, will be covered by a tarp until then. About 40 residents and businesses helped pay for the sign, which is accompanied by a bronze plaque telling the brothers' story.

Afterward, the surviving Kunst brothers will be signing the two books they wrote about the walk. They'll lead Saturday's parade, accompanied by yet another mule, while family members ride in a replica wagon.

"I'm so thrilled and so honored and so excited," Dave Kunst said.

After completing his trip in 1974, he moved to Australia for a year, then came back to Minnesota to be a projectionist in St. Paul before moving to California. Kunst toured schools there, telling children about his travels on four continents and in 13 countries.

These days, Kunst said he walks about 2 miles each day with Samuel by their home near Newport Beach, Calif. This week they drove three days in a Mustang convertible to return to Minnesota.

"The walking's over," Kunst said.