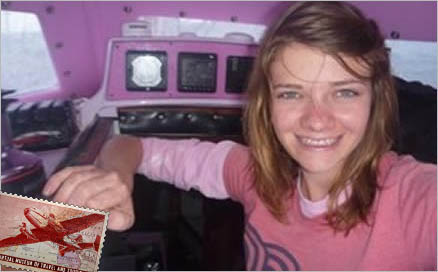 Jessica Watson, OAM (born 18 May 1993) is an Australian sailor who was awarded the Order of Australia Medal for completing a southern hemisphere solo circumnavigation at the age of 16. Departing Sydney on 18 October 2009, Watson headed north-east crossing the equator in the Pacific Ocean before crossing the Atlantic and Indian Oceans. She returned to Sydney on 15 May 2010, three days before her 17th birthday. The voyage was shorter than the required 21,600 nautical miles to be considered a global circumnavigation, and Watson never claimed the voyage to be an attempt at such, preferring the less formal term 'around the world'. In recognition of her achievement Watson was named the 2011 Young Australian of the Year, and the following year was awarded a Medal of the Order of Australia. She currently resides in Buderim, Queensland.

There are no known attempts at transcontinental rides in 1888 or 1889 and since the day of the standard high wheel bike was coming to an end, the future of such undertakings seemed uncertain. The question was resolved; however, in 1890 when 5'6" tall Frank E. Weaver made a cross-country trip on a 48" Eagle bicycle.
Weaver, named Franklin Everett at his birth on November 1, 1870 in New Bedford, Massachusetts, was a prominent member of the New Haven Bicycle Club and he held the club's record for both road and long-distance rides. Many young men like Weaver favored riding an Eagle. Nothing is known about his motives and plans for the ride, but the Eagle Bicycle Company of Stamford, Connecticut may have supported the idea since they used his testimonial about the Eagle after the ride was completed. It is known that following the example of Thayer and Nellis, Mr. Weaver made arrangements to supply periodic reports of his trip to the Bicycling World and L.A.W. Bulletin and the New Haven Palladium. In the following paragraphs citations to these publications will use the abbreviations, BW and PL.
As indicated by his route and stops, the ride was made for pleasure. He departed from New Haven on April 21, 1890 and proceeded down the Atlantic coast to Washington, DC. He did some sightseeing and then made a several day long loop rides into northern Virginia to view Civil War battle sites, including one near Winchester where, "about twenty-five years ago my father skipped through here barefooted."(PL May 22) In Virginia he also had an experience mentioned by other wheelmen. "Three natives naively tempted me to try a thirty-foot ford, then enjoyed a hearty laugh when the soft sand in the center made me dismount in water knee deep."(BW May 23)
He returned to the Hagerstown, Maryland area and followed the National Pike through Pennsylvania, Ohio, Indiana, and Illinois (passing south of Chicago), to St. Louis, Missouri. When passing through the Hoosier State, "A rather fresh young fellow loosened the rope of his bull dog so that when the dog ran in front the rope came across the wheel, causing a dismount…he began untying the dog and threatened to set him on (me). I showed a reliable .38 caliber and told him to get his dog out of the way if he wanted to take him home alive. That settled it." (BW June 13)
Over two days were spent seeing the St. Louis sights, including the Anheuser Bush brewery. A St. Louis paper had printed Weaver's route in the region and this aggravated the problem of curiosity and questions faced by all riders. "I am regularly spotted, and the irritating inquisitiveness often causes me to take a breathing spell by the roadside, in preference to the small villages."(BW June 20)
As the ride continued across Kansas, Weaver complained of the heat and mirages. "My appearance on a hot day stripped for riding would cause a sensation in an eastern town. A coat in a roll across my back, a broad brimmed misshapen straw hat, Jersey pants rolled above the knees, high shoes unlaced at the top, and Jersey waist unlaced at the neck with a bandanna stuck under my belt. This makes a comfortable if not fastidious garb."(BW July 11) A more dangerous situation encountered by most wheelmen was being caught on a trestle by a train. Weaver was caught in this manner. "Giving my wheel a yank I swung it over the side and hung it to a cross tie, hanging by the saddle, and jumped off the bridge, landing fifteen feet below, fortunately without a scratch. If we had made the jump from the middle, where it was fifty feet, it would have been a cold day."(BW July 4)
In Colorado Weaver went to the top of Pike's Peak without his bicycle and examined mining operations in Leadville. The ride continued to Provo and Salt Lake City where he took a dip in the Lake and came to the conclusion that polygamy was on its last legs. He also reports, "Am I tanned?…I heard two young "hopefuls" disputing as to whether I was a white or black….It was evident that the scorching I got on the Kansas plains left a deep imprint."(BW Sep. 12)
When Weaver reached the rail center of Ogden, he took a nine-day excursion trip to the country's first national park, Yellowstone. After returning to Ogden he crossed most of Nevada by train and proceeded west from Reno with a stop to see Lake Tahoe. Passing through the Sierras along the railroad route presented no difficulties until flooding was encountered near Sacramento. This problem, in addition to painful boils, led him to travel by train to Oakland.
He arrived in San Francisco on August 15, 1890 and was reunited with a long absent brother. He was also joined by prominent Boston wheelmen W. S. Doane, who accompanied him on the return trip by ship and Isthmus train as had been done by Nellis (Doane had ridden an Apollo from Denver to Boston in 1888).
The newspaper accounts of the journey are well written and they contain the best known information on the cost of such an undertaking. Weaver gives cost data in almost every article and the average weekly expenditure was about $15 or $255 for the 17-week journey. These amounts include clothing repair and replacement and the cost of any train travel, but they do not include the cost of the return voyage. In 2001 it would require $4826 to purchase what cost $255 in 1890.
Upon return to the Waterbury, Connecticut area, he married Sara Reed Stowe in 1893 and the couple had three sons and one daughter. Weaver became Vice President of the American Brass Company in Waterbury, Connecticut. His grandson, Alan Weaver, remembers being told of the adventure on the trestle and encounters with non-hostile Indians. He also recalls that his grandfather, although somewhat reclusive in his later years, would walk several miles to bring him rock candy. Unfortunately Frank Weaver's smoking led to a fire that destroyed the journals of his ride. Mr. Weaver died in 1954.

In 1873, Webb was serving as captain of the steamship Emerald when he read an account of the failed attempt by J. B. Johnson to swim the English Channel. He became inspired to try himself, and left his job to begin training, first at Lambeth Baths, then in the cold waters of the Thames, the English Channel and Hollingworth Lake. His early training was backed by Fred Beckwith who was the "Professor" at Lambeth Baths. Beckwith organised a spectacle by showing Webb swimming miles in the River Thames. Webb completed ‘nearly six miles’, but the poor public interest meant that Beckwith lost money. As a result Webb took another manager.
On 12 August 1875, he made his first cross-Channel swimming attempt, but strong winds and poor sea conditions forced him to abandon the swim. On 24 August, he began a second swim by diving in from the Admiralty Pier at Dover. Backed by three escort boats and smeared in porpoise oil, he set off into the ebb tide at a steady breaststroke. Despite stings from jellyfish and strong currents off Cap Gris Nez which prevented him from reaching the shore for five hours, finally, after 21 hours and 45 minutes, he landed near Calais—the first successful cross-channel swim. His zig-zag course across the Channel was over 39 miles (64 km) long.
https://en.wikipedia.org/wiki/Matthew_Webb 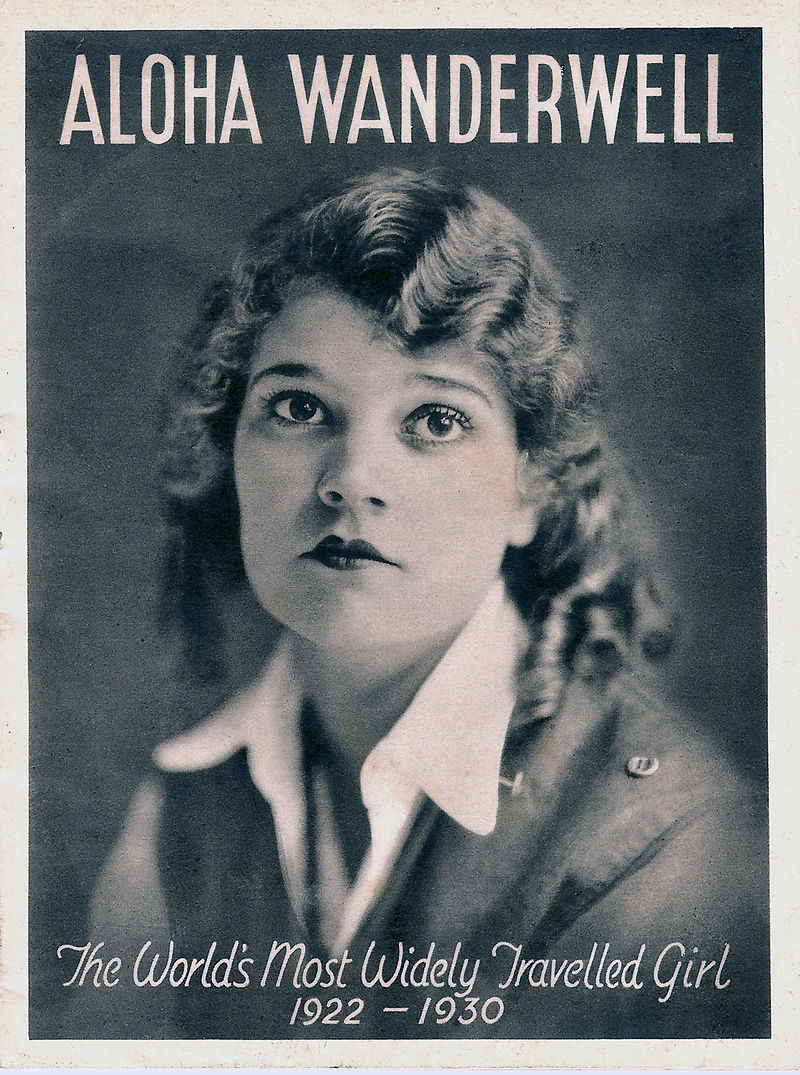 The female Indiana Jones! Fascinating images capture the adventures of a 1920s traveller who visited 80 countries... in a Model T Ford

Aloha Wanderwell from Winnipeg in Canada has been described as a female Indiana Jones
The teenage adventurer toured the world aged 16 after answering an ad for a driver in a French newspaper
She went on to travel 380,000 miles over the course of the 1920s and became a global celebrity

Nowadays, backpacking around the world has almost become a rite of passage for a certain breed of teenager.

But back in the day, the spectacle of a 16-year-old girl touring the globe was enough to turn her into a worldwide celebrity.

Aloha Wanderwell from Winnipeg in Canada has been described as a female Indiana Jones after becoming the first woman to drive around the globe, visiting 43 countries in a Ford Model-T in her teens.

During her travels, she made some of the earliest films of the Bororo people of Brazil, became the first woman to fly the country’s Mato Grosso state and filmed the first flight around the world.

Wanderwell, who was born as Idris Galcia Hall, first got a taste for travel as a child when she began reading her British Army reservist father’s collection of boy’s adventure books.

In 1922, at the age of 16 and now living in France with her mother and sister following the death of her father in the First World War, she answered a newspaper advert asking for, ‘Brains, Beauty & Breeches – World Tour Offer For Lucky Young Woman… Wanted to join an expedition!’

The advert had been placed in the Riviera edition of the Paris Herald by a man called Captain Walter Wanderwell (real name Valerian Johannes Piecynski), an adventurer, inventor and former sailor who was looking for a French-speaking secretary and driver on his expedition to promote world peace.

The captain met Idris in Paris and was so impressed with her sense of adventure that he immediately gave her the stage name ‘Aloha Wanderwell’ and signed her up.

The pair embarked on a decade-long trip around the globe just a few weeks later and Aloha quickly became the star of the show.

In their first adventure, the duo visited 43 countries on four continents, including the battlefields of France, post-war Germany, Egypt, Palestine, India, East Africa, Indo-China and Siberia, where she was given the title of 'Honorary Colonel' by the Red Army.

On a subsequent tour of the US, Aloha and the captain got married and they went on to have two children, Nile and Valri, but the new arrivals didn’t dull their sense of adventure.

They released a documentary about their first world tour that made them famous across the western world. They then followed this up with a second tour, which incorporated the Amazon jungles of Brazil, where their plane crashed.

After the crash, Aloha befriended the local Bororos tribes and made her second documentary called Flight to the Stone Age Bororos.

Unfortunately, Captain Wanderwell was murdered in 1932 in California, but Aloha continued her travels.

After marrying the cameraman for the next stages of her adventures, Walter Baker, in the early 1930s, she went on tour the world with him for much of her life, making films and writing about her experiences - and the results are displayed in museums across the world.

She passed away in California in 1996 at the age of 90.
http://www.dailymail.co.uk/travel/travel_news/article-4048936/The-female-Indiana-Jones-Fascinating-images-capture-adventures-1920s-traveller-visited-80-countries-Model-T-Ford.html