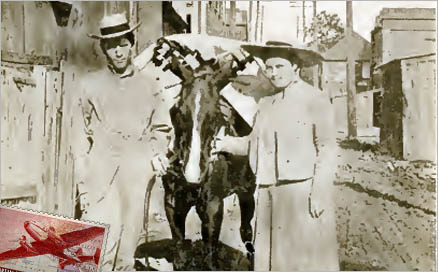 The unique experience of Mr. and Mrs. Dwight H. Woolf, the champion Long Distance Walkers, has awakened general interest through- out the United States.
In 1909, Mr. Woolf's doctor informed him that he would have to get out in the open and stay there, or he would die. He weighed only 107 pounds, including clothes, and was growing weaker daily. Yet he hesitated about giving up his business as a music publisher — his life work; and it seemed a little short of madness to forego all the luxuries — the so-called "comforts"— of civilization.
But Mrs. Woolf, who was a brave, sensible woman, thoroughly devoted to her husband's interests, agreed with the physician and suggested a walk to the Ozark Mountains.
That was the beginning of a most remarkable series of trips through Missouri, Kansas, Texas, Mississippi, Alabama, Georgia, and up through the north Atlantic States to New York and Boston, then home to Kansas City — in the aggregate, a journey of about 10,300 miles.
Yet, wherever the couple went there was really but one destination — health.
Mr. Woolf gained strength and, not long after starting, was able to make twenty-five or thirty miles in a day. Clad in neat khaki uniforms, he and his wife — now the leading woman pedestrian of the world — marched from city to city, accompanied by Dolly and Don, their faithful horse and dog.
The group was often surrounded by cheering crowds, or met by newspaper reporters and escorted with honor by delegations of police into the presence of mayors and other officials, who received the travelers cordially.
But the "Walking Woolfs" gained something far more valuable than honor or fame; and their advice to others who have suffered from the effects of sedentary work is:
"When you get into a rut walk out of it."
He who draws close to nature is rewarded in many ways, not the least of which is perfect health.
The object of this book is to preach the doctrine of exercise and fresh air.