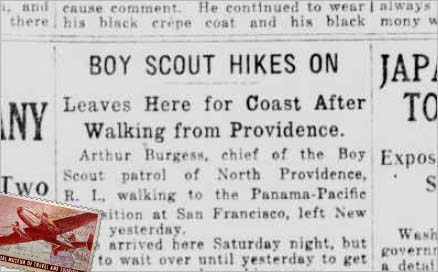 Leaves here for coast after walking from Providence.

Arthur Burgess, chief of the Boy Scout patrol of North Providence, R. I., walking to the Panama-Pacific Exposition at San Krancisco, left New York yesterday. He arrived here Saturday night, but had to wait over until yesterday to get the necessary seals on his paper. He is seventeen years old and started his walk April 16 with Arthur Lean Hopper, who quit because of sore feet on reaching Washington, Rhode Island, April 18. Burgess hope to cover the distance in five months.