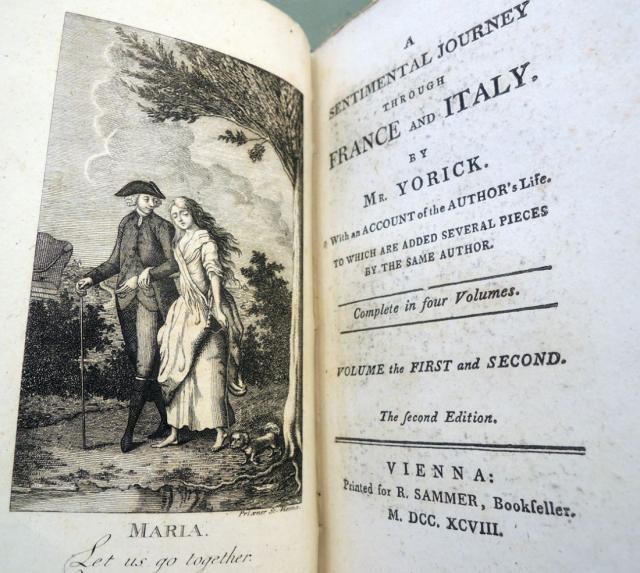 Yorick's journey starts in Calais, where he meets a monk who begs for donations to his convent. Yorick initially refuses to give him anything, but later regrets his decision. He and the monk exchange their snuff-boxes. He buys a chaise to continue his journey. The next town he visits is Montreuil, where he hires a servant to accompany him on his journey, a young man named La Fleur.

During his stay in Paris, Yorick is informed that the police inquired for his passport at his hotel. Without a passport at a time when England is at war with France (Sterne traveled to Paris in January 1762, before the Seven Years' War ended[2]), he risks imprisonment in the Bastille. Yorick decides to travel to Versailles where he visits the Count de B**** to acquire a passport. When Yorick notices the count reads Hamlet, he points with his finger at Yorick's name, mentioning that he is Yorick. The count mistakes him for the king's jester and quickly procures him a passport. Yorick fails in his attempt to correct the count, and remains satisfied with receiving his passport so quickly.

Yorick returns to Paris, and continues his voyage to Italy after staying in Paris for a few more days. Along the way he decides to visit Maria—who was introduced in Sterne's previous novel, Tristram Shandy—in Moulins. Maria's mother tells Yorick that Maria has been struck with grief since her husband died. Yorick consoles Maria, and then leaves.

After having passed Lyon during his journey, Yorick spends the night in a roadside inn. Because there is only one bedroom, he is forced to share the room with a lady and her chamber-maid ("fille de chambre"). When Yorick can't sleep and accidentally breaks his promise to remain silent during the night, an altercation with the lady ensues. During the confusion, Yorick accidentally grabs hold of something belonging to the chamber-maid. The last line is: "when I stretch'd out my hand I caught hold of the fille de chambre's...End of vol II". The sentence is open to interpretation. You can say the last word is omitted, or that he stretched out his hand, and caught hers (this would be grammatically correct). Another interpretation is to incorporate 'End of Vol. II' into the sentence, so that he grabs the Fille de Chambre's 'End'.