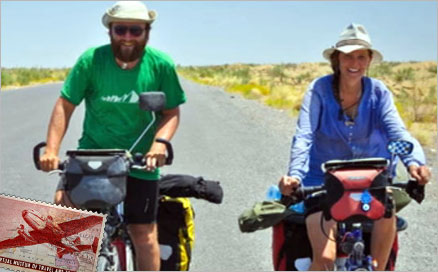 We are Mary Thompson and Peter Root. At 5.00pm on the 12th July 2011 we got the boat to France with loads of stuff and two bikes. We’ve created this website to document our adventures along the way.

Previous adventures include extensive travel around South America, where we ran art workshops at the Hogar Granje orphanage in Sucre, Bolivia, as well as intrepid sightseeing in many other countries including India, China and South Africa. In 2008 Mary and I cycled from Landsend to John O’Groats with our friend Julien. Have a look at Julien’s blog to find our more about our trip – landsend.wordpress.com

British cyclists on round-the-world trip killed in Thailand
Peter Root and Mary Thompson, from Guernsey, hit by truck in province east of Bangkok

A British couple's round-the-world cycling odyssey ended in tragedy when both of them were killed in a road accident in Thailand.

Peter Root and Mary Thompson, who had been chronicling their journey in a blog, died on Wednesday when they were hit by a truck in a province east of Bangkok.

The couple, both 34 and from Guernsey in the Channel Islands, had been cycling through Europe, the Middle East, Central Asia and China since July 2011.

"They were both inspirational," Root said. "They didn't just talk about it, they did it. I couldn't be prouder of them."
Guardian Today: the headlines, the analysis, the debate - sent direct to you
Read more

He said they were both experienced cyclists who knew the rigours and risks of extended bicycle travel.

"They were camping wild, as they called it," he said. "What helps me is to think of how happy they were with each other. They were leading the life they wanted to. It was the happiest, the most fruitful of lives."

The couple had been posting photos and details of their trip on the website Two on Four Wheels. They also had many followers on Twitter and Facebook who were tracing their journey and vicariously enjoying their adventure, which included a trip through remote parts of Central Asia.

A video they posted from that part of the journey shows them camping in the desert, riding through hills, stopping to swim in rivers and lakes, and braving heavy snowstorms. They also cycle through tense situations as armed conflict breaks out during their journey through Tajikistan.

"They never talked about the trip as having a destination or a deadline or a time scale," said Ben Thompson, Mary's brother. "They didn't have firm plans, they had rough ideas. They just loved people. They were always dragging people to the campfire to share a story and a beer and some food."

After south-east Asia, the couple were planning to make their way to New Zealand for a brief respite, he said.

Thai police said that investigators found their bodies, their bicycles and their belongings scattered along a roadside, along with a pickup truck that crashed between some trees.

The truck driver, 25-year-old Worapong Sangkhawat, was seriously injured in the crash and faces charges of causing death by dangerous driving.
https://www.theguardian.com/uk/2013/feb/18/british-cyclists-killed-thailand

Alfred Henry Tipper (1867-1944), cyclist and showman, was born on 12 July 1867 at Sale, Victoria, second son of Thomas Tipper, a grocer from England, and his Irish-born wife Catherine, née Chadwick. Alfred claimed to have been abandoned by his parents at the age of 2 and brought up as a ward of the state. In his youth he worked on a dairy farm and also acquired a considerable knowledge of mechanics. He took up competitive cycling in the 1880s, during the early stages of the boom in that sport.

Following the trend for undertaking long distances, Tipper rode from Sydney to Melbourne in 1896, carrying a 70-lb. (32 kg) swag. He built an enduring career by combining cycling with showmanship and mechanical ingenuity. In 1904-24 he produced a series of miniature bicycles, ranging from 4½ ins (11 cm) to 10 ins (25 cm) in height. In 1908 he set out to work and ride his way around the world. He began his journey with just one penny in his pocket and returned, after six years and 85,000 miles (136,794 km), with four shillings and sixpence. While in Britain and the United States of America, he perfected his 'singing and comedy cycling act' which sustained him for years to come in his travels around Australia.

By the 1930s Tipper was part-owner of a bicycle shop at Richmond, Melbourne. He lived in a horse-drawn caravan, constructed from the body of an old Ford motorcar. Known as 'Professor' Tipper, he cultivated a flowing white beard and advocated simple diet and 'rational dress'. His 6 ft 3 ins (191 cm) frame remained supple in his seventies, and he often wore only a thin shirt and 'little short pants'. The 'professor's' gift for publicity was undimmed. In summer months he toured with a selection of his seventy bicycles, performing trick cycling and teaching children to ride. He was presumably the first person to ride a five-inch (13 cm) bicycle while singing Highlands and Lowlands.

Tipper produced postcards documenting his achievements and worked at developing a pedal-powered aeroplane. He died on 2 April 1944 in Royal Melbourne Hospital and was buried in Fawkner cemetery. His death certificate stated that he was married, but when, where and to whom remain unknown. The sale of his effects realized £4 5s. His possessions included five works of art—signed 'H. D.' but possibly painted by him—which were later displayed in the window of a bicycle shop in the city. The paintings, showing Tipper and his bicycles set against backdrops of Australian towns and countryside, caught the eye of Albert Tucker, and featured on the cover of Angry Penguins in December 1944. Tucker acclaimed the works as those of a 'natural artist', possessing a 'startling sense of life expressed through an unfaltering sense of form, pattern, texture and color'. He asserted that 'problems of style and technique' mattered little for the 'primitive' painter; 'the sustained intensity of his vision' solved them for him.
http://adb.anu.edu.au/biography/tipper-alfred-henry-11866

I sat down one day and jotted down some thoughts on why exactly I want to do this. Usually I wouldn’t feel a need to justify myself, but, I mean come on, around the world by recumbent bicycle and skateboard?
Of course I have feelings of ‘I want adventure‘ and ‘I want to get away from it all for a bit’, but I think the biggest purpose for this trip is to attempt to confirm what I have come to believe over the past few years about us humans. And that is that I believe that we all share a common humanity. That is, we need to eat, we need to sleep, we cry, we laugh, we want to be happy, we want the best for our family and friends. The list goes on.
Before I came to Japan, I didn’t really even consider that people from cultures other than the English speaking culture felt emotion. That’s a daft thing so say I know. All humans feel emotion. But if that’s so obvious, why do I find myself every now and then being taken a-back and moved when I converse in Japanese to Japanese people? Everynow and then it hits me – these people are no different from me!
Working at Asia Pacific University, I have had the opportunity to come in contact with people from countries from all over the world. This has fuelled a desire to go to some of these places and exprience the culture and humanity of those people first-hand.
As for doing the trip on a bicycle, there a few reasons. On a bicycle, you experience the environment first-hand. Weather, topography, conditions. This contributes to a deeper understanding of the area that one is visiting. On a bicycle, you are travelling with minimal detriment to the environment. Less fossil fuels burnt. On a bicycle I have relative freedom in where I want to go, and when. I am not bound by timetables. 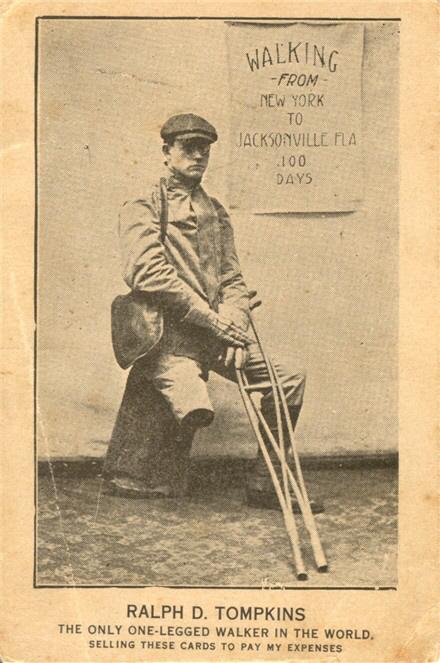 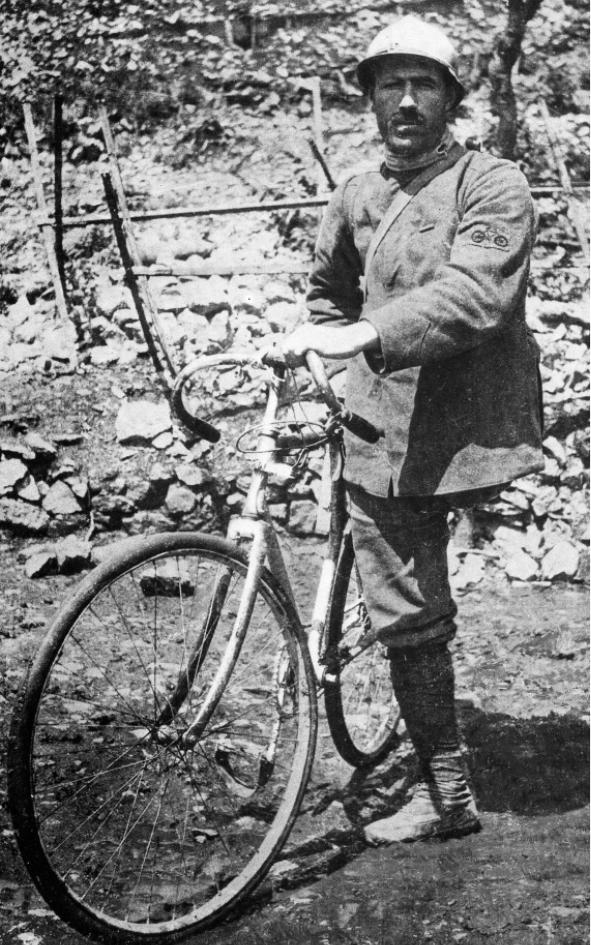 Enrico lost his left leg while working for Italian railways, at the age of 24. After his injury he became a cyclist. In 1911, riding on a bicycle with one leg, he cycled to Paris, and then through Belgium, the Netherlands and Denmark, up to Finland and Lapland. From there, via Russia and Poland, he returned to Italy in June 1912. In January 1913 Toti started cycling again, this time in Egypt; from Alexandria, he reached the border with Sudan where the English authorities, considering the trail too dangerous, ordered him to end the journey, and sent him to Cairo where he came back to Italy. When war broke out between Italy and the Austrian Empire, Toti tried to volunteer for the Italian army but was not accepted due to his injury. Undaunted, he reached the frontline with his bicycle and managed to serve as an unpaid, unregistered, fully non-regulation "civilian volunteer" attached to several units. Forced to leave the combat zone and return home by the Carabinieri (Military Police), Toti stubbornly returned to the front and finally managed to join (still unofficially) the 3rd Bersaglieri Bicycle Battalion. He was killed in the Sixth Battle of the Isonzo. Fatally wounded in a clash, he hurled his crutch at the enemy. Before falling on the ground he shouted: "Nun moro io!" (romanesco vernacular for "I do not die!").[citation needed]

He was posthumously awarded the Gold Medal of Military Valor (Italy's highest award for valour), one of the relatively few civilians to have this honour bestowed on them.