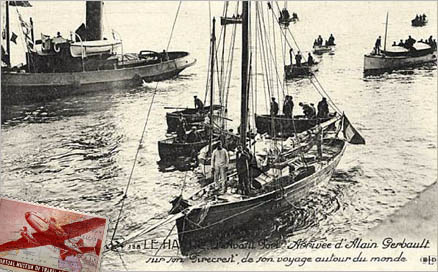 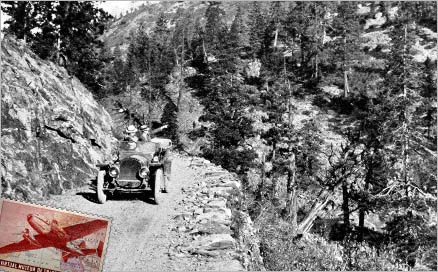 A FOREWORD THAT IS A RETROSPECT
From the Pacific to the Atlantic by the Lincoln Highway, with California and the Virginias and Maryland thrown in for good measure! What a tour it has been! As we think back over its miles we recall the noble pines and the towering Sequoias of the high Sierras of California; the flashing water-falls of the Yosemite, so green as to be called Vernal, so white as to be called Bridal Veil; the orchards of the prune, the cherry, the walnut, the olive, the almond, the fig, the orange, and the lemon, tilled like a garden, watered by the hoarded and guarded streams from the everlasting hills; and the rich valleys of grain, running up to the hillsides and dotted by live oak trees. We recall miles of vineyard under perfect cultivation. We see again the blue of the Pacific and the green of the forest cedars and cypresses. High Lake Tahoe spreads before us, with its southern fringe of emerald meadows and forest pines, and its encircling guardians, lofty and snow-capped. The high, grey-green deserts of Nevada, Utah, and Wyoming stretch before us once more, and we can smell the clean, pungent sage brush. We are not lonely, for life is all about us. The California quail and blue-jay, the eagle, the ground squirrel, the gopher, the coyote, the antelope, the rattlesnake, the big ring snake, the wild horse of the plains, the jack rabbit, the meadow lark, the killdeer, the red-winged blackbird, the sparrow hawk, the thrush, the redheaded wood-pecker, the grey dove, all have been our friends and companions as we have gone along. We have seen them in their native plains and forests and from the safe vantage point of the front seat of our motor car.
The lofty peaks of the Rockies have towered before us in a long, unbroken chain as we have looked at them from the alfalfa fields of Colorado.
We have seen the bread and the cornbread of a nation growing on the rolling prairies of Nebraska, Iowa, and Illinois. We have crossed the green, pastoral stretches of Indiana and Ohio and Pennsylvania. The red roads of Virginia, winding among her laden orchards of apples and peaches and pears and her lush forests of oak and pine; the yellow roads of Maryland, passing through her fertile fields and winding in and out among the thousand water ways of her coast line, all come before us. These are precious possessions of experience and memory, the choice, intimate knowledge to which the motorist alone can attain.
The Friends of the Open Road are ours; the homesteader in his white canopied prairie schooner, the cattleman on his pony, the passing fellow motorist, the ranchman at his farmhouse door, the country inn-keeper hospitably speeding us on our way.
We have a new conception of our great country; her vastness, her varied scenery, her prosperity, her happiness, her boundless resources, her immense possibilities, her kindness and hopefulness. We are bound to her by a thousand new ties of acquaintance, of association, and of pride.
The Lincoln Highway is already what it is intended to be, a golden road of pleasure and usefulness, fitly dedicated, and destined to inspire a great patriotism and to honour a great patriot.
October, 1914.

Gladding E. P., Across the Continent by the Lincoln Highway, New York: Brentano’s, 1915.

Willard Glazier was the ultimate ironman and a peerless survivor. He lived by his sword and by his pen.

The quintessential self-made man grew up poor on a farm in St. Lawrence County and dropped out of school to make a living as a trapper in the wilds of the North Country. He saved enough to buy a horse and at 18 rode to Albany. He enrolled in 1859 at the State Normal School (now the University at Albany), with the intent of becoming a teacher. He ran out of money after a semester and had to leave, but he picked up temporary teaching jobs in rural Rensselaer County while periodically returning to college when he had enough cash.

In 1861, Glazier, most of his college classmates and two instructors enlisted in the Union Army. Since he had a horse, he was assigned to cavalry and the 2nd Regiment of New York.

He was taken prisoner Oct. 18, 1863, in a Civil War battle at Buckland Mills, Va. He escaped from confinement in Columbia, S.C,. was recaptured near Springfield, Ga., escaped again and with the help of several African-Americans, made his way safely back home to Albany. But his term of service had expired and he re-entered the Union Army as 1st lieutenant with the 26th New York Cavalry. He served with valor until the end of the war and was promoted to brevet general for “meritorious service.”

He married Harriet Ayers of Cincinnati in 1868, an understanding wife who supported Glazier’s unquenchable wanderlust.

He transformed himself into an explorer and adventure travel writer. He rode a horse from Boston to San Francisco, beginning in 1875 and finishing a year later. He was captured by Native Americans in the Wyoming territory and escaped, which helped sell copies of his  book, “Ocean to Ocean on Horseback.”

In 1881, he set out to travel the entire 2,300-mile length of the Mississippi River by canoe. His adventures yielded two books and the discovery of what he considered the true source of the Mississippi. Although it was disputed as the source, Lake Glazier was named in his honor.

In addition, he organized a regiment for the Spanish-American War, had a river named for him after exploring uncharted territory on the Labrador peninsula, wrote several best-selling books and lectured around the U.S.

Glazier traveled a lot of hard miles and died at age 64 in 1905. His final resting place is among “Millionaires’ Row,” in Section 29, Lot 26, and his large granite marker is strikingly visual: crossed swords, a bugle, canteen, a waving American flag and a long list of accomplishments that kept a stone carver’s chisel ringing for days.

Meet Mark Gibbens, a 50 year old Australian Registered Nurse and Ultra Distance Walker.
In 2006, after living in Japan for eight years, he was determined to repay the kindness of the Japanese people. So with the support of the Japanese Medical Association he walked the length of Japan (3000km) from Sada Misaki to Sato Misaki with the simple message of "No Smoking Is Love", in the process generating millions of dollars of health promotion advertising.
Building on this success, in 2009 with the support of Australian Rotary Health and individual Rotary Clubs across the country, he walked 5200km solo across Australia, raising $25,000 for Children's Cancer Research.
His next endeavour - walking from San Francisco to New York - 5000km in 50 days, to raise money for Red Cross water and sanitation projects. His plan is to leave from Lincoln Park, San Francisco on Saturday the 24th of August 2013 and arrive in Times Square, New York on Saturday the 12th of October 2013. 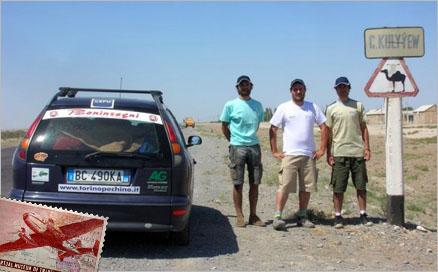 Da Torino a Pechino a GPL! 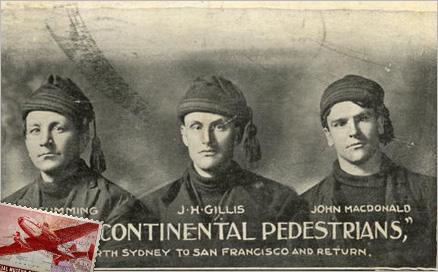