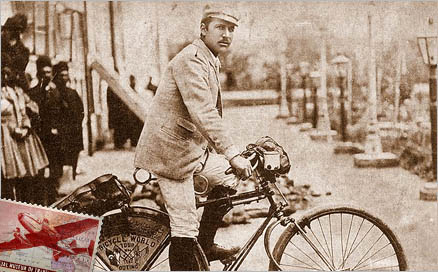 The Englishman Thomas Stevens had completed the first circumnavigation of the globe by bicycle in 1884–1886, and Lenz wanted to make an attempt of his own. He was hired by the magazine Outing (for which Stevens had worked) to publish reports and take photographs from his journey, and set out from the Smithfield Street Bridge in Pittsburgh on a Victory safety bicycle on May 15, 1892 with 800 onlookers wishing him well.

Going first to Washington, D.C. and New York he then traveled west across the United States and parts of Canada, reaching San Francisco on October 20.

From San Francisco he sailed to Japan, where he rode from Yokohama to Nagasaki before crossing to China. While he seems to have had a pleasant trip through Japan, which he praised in his reports, China proved a tougher stage of his journey. Japan had good roads for the time but the roads in China were in poor condition, especially in winter, and the locals were often hostile or fearful. He had expected to cross China in three months, but it took him six, and he was very happy when he reached Burma, part of the British Empire.

The jungles of Burma proved another difficult obstacle, with heavy rain and almost impassable roads, and he also contracted malaria there. Reaching Rangoon he found it impossible to ride his bike the next stage of his journey, and instead crossed by ship to Calcutta. In early October 1893 he left Calcutta, and spent the next month crossing to Lahore.

From Lahore he decided to travel south to Karachi, and then traveled by steamer to Bushire in Persia, riding north to Teheran from there. He found Teheran a delightful place, and was loath to leave, but set out for Tabriz in April 1894, hoping to reach Istanbul before the worst of the summer heat.

In early May, 1894, almost two years after his departure from Pittsburgh, he set off from Tabriz on the next stage of his journey, with Erzurum as his next objective. He was never heard from again.

When nothing was heard from Lenz throughout the summer, his family started to worry that something might have happened. The Ottoman Empire was at this time going through a period of turmoil, the ongoing Hamidian Massacres were killing tens of thousands of Armenians. It was difficult to ascertain what might have happened, but Alexander Terrell, the U.S. minister to Turkey, felt sure that Lenz had been killed by Kurdish bandits.

Outing Magazine eventually sent another famous bicyclist, William Sachtleben, to Turkey to investigate the circumstances of Lenz' disappearance. Sachtleben had completed his own bike journey around the world in 1892, along with his friend Thomas Allen. He sailed to Europe in March 1895, and traveled to Erzurum, having to forge papers to gain entrance to Kurdistan.

In Erzurum, Sachtleben learned that Lenz had somehow insulted a notorious Kurdish chief when passing through a small village. The Kurds then apparently ambushed and killed him, burying his body on the bank of a river.

The Kurdish bandit was charged and convicted by the Turkish authorities, but had already fled. Some of the Armenian locals who had helped Sachtleben uncover Lenz' fate were also imprisoned, a couple of them dying in prison. Eventually, some eight years after his death, following pressure from the U.S., the Turkish government agreed to pay a compensation of $7,500 to Lenz' mother.