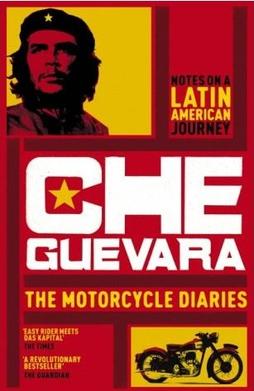 This isn't a tale of derring-do, nor is it merely some kind of "cynical account"; it isn't meant to be, at least. It's a chunk of two lives running parallel for a while, with common aspirations and similar dreams. In nine months a man can think a lot of thoughts, from the height of philosophical conjecture to the most abject longing for a bowl of soup – in perfect harmony with the state of his stomach. And if, at the same time, he's a bit of an adventurer, he could have experiences which might interest other people and his random account would read something like this diary. Diary introduction

The Motorcycle Diaries (Spanish: Diarios de Motocicleta) is a memoir that traces the early travels of Marxist revolutionary Ernesto "Che" Guevara, then a 23-year-old medical student, and his friend Alberto Granado, a 29-year-old biochemist. Leaving Buenos Aires, Argentina, in January 1952 on the back of a sputtering single cylinder 1939 Norton 500cc dubbed La Poderosa ("The Mighty One"), they desired to explore the South America they only knew from books. During the formative odyssey Guevara is transformed by witnessing the social injustices of exploited mine workers, persecuted communists, ostracized lepers, and the tattered descendants of a once-great Inca civilization. By journey's end, they had travelled for a symbolic nine months by motorcycle, steamship, raft, horse, bus, and hitchhiking, covering more than 8,000 kilometres (5,000 mi) across places such as the Andes, Atacama Desert, and the Amazon River Basin.

The book has been described as a classic coming-of-age story: a voyage of adventure and self-discovery that is both political and personal. Originally marketed by Verso as "Das Kapital meets Easy Rider", The Motorcycle Diaries has been a New York Times bestseller several times.