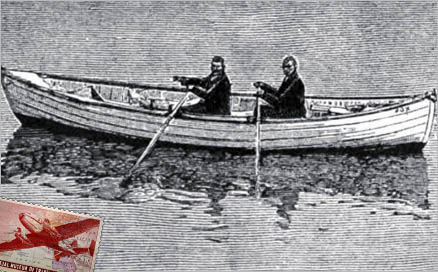 True Log of the Fox
On June 6th, 1896 George Harbo and Frank Samuelsen departed from New York's Battery in an 18 foot rowboat destination Europe.  They took the northern route skirting in and out of the shipping lanes.  The same shipping passages that the Titanic would later use and the same areas fished by Gloucester and Nova Scotia fisherman.
They encountered a pod of whales, gale force winds and high following seas.  At one point they were broadsided by a large wave and capsized.  They were prepared, and the 'hand rails' which were placed on the keel, by their design, helped them right the small open boat in minutes.
Rowing, each man put in a total of 18 hours a day.  They never could both sleep because their small vessel would stray off course without constant rowing.  They often averaged 50 - 60 miles per day on their 3,000 mile voyage.
On August 1st they arrived at the Sicily Islands which is the British Isles most western point in a record time of 55 days.  Since that achievement many rowers have attempted to best this record, but as of this date 2 Men in an open rowboat, without sail, motor, cover or rudder,  have yet to beat this time or match the achievement with corresponding equipment.