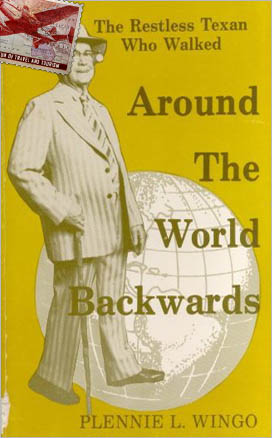 Plennie Lawrence Wingo (January 24, 1895 – October 2, 1993) walked backwards from Santa Monica, California to Istanbul, Turkey (about 13,000 km/8,000 miles) from April 15, 1931 to October 24, 1932 at the age of 36. He documented his voyage in the book Around the world backwards.
"Plennie L. Wingo, a man walking around the world backwards, stopped in St. James long enough to get some new toe taps for his shoes. This was the 4th pair he had wore out. He started from Fort Worth, Texas, April 15th, and has been walking ever since. He wears periscopic eyeglasses, fastened over his ears like regular spectacles, which enables him to see where he is walking. He will continue on 66 to St. Louis then on Highway 40 to New York where he will secure passage to Europe. Wingo expects to complete the trip in about four years. He depends entirely on the sale of postcards for his expenses.[3] He averages about 20 miles per day."
PL Wingo is mentioned (although not by name) in Robert Edison Fulton's One Man Caravan, his account of motorcycling around the world, while in Greece. He writes: "The figure of a man appeared. From his shoulder projected a bracket supporting a mirror. The sun intermittently reflected in his joggling glass. There was a sign on the man's back. As I approached, the letters grew enormous: 'Look Out! Look Out! Walking around the world backward!"
https://en.wikipedia.org/wiki/Plennie_L._Wingo