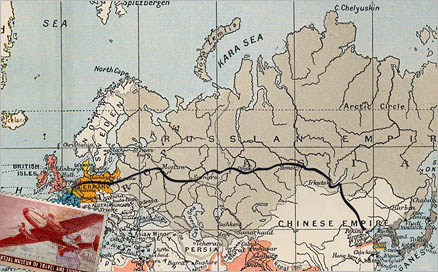 There were no rules in the race, except that the first car to Paris would win the prize of a magnum of Mumm champagne. The race went without any assistance through countryside where there were no roads or roadmaps. For the race, camels carrying fuel left Peking and set up at stations along the route, to provide fuel for the racers. The race followed a telegraph route, so that the race was well covered in newspapers at the time. Each car had one journalist as a passenger, with the journalists sending stories from the telegraph stations regularly throughout the race.

The race was held during a time when cars were fairly new and the route traversed remote areas of Asia where people were not yet familiar with motor travel.[citation needed] The route between Peking and Lake Baikal had only previously been attempted on horseback. The race was won by Italian Prince Scipione Borghese of the Borghese family, accompanied by the journalist Luigi Barzini, Sr. He was confident and had even taken a detour from Moscow to St Petersburg for a dinner which was held for the team, and afterwards headed back to Moscow and rejoined the race. The event was not intended to be a race or competition, but quickly became one due to its pioneering nature and the technical superiority of the Italians' car, a 7,433 cc (453.6 cu in) Itala 35/45 HP.

Second in the race was Charles Godard in the Spyker; he had no money, had to ask others for petrol, and borrowed his car for the race. He was arrested for fraud near the end of the race. Some of the other cars had difficulties in going up ravines, across mud, quicksand, and bridges across rivers not designed for vehicles. The Contal cyclecar became bogged down in the Gobi desert and was not recovered, with the crew lucky to be found alive by locals. Barzini published the book Peking to Paris in 1908, filled with hundreds of pictures.