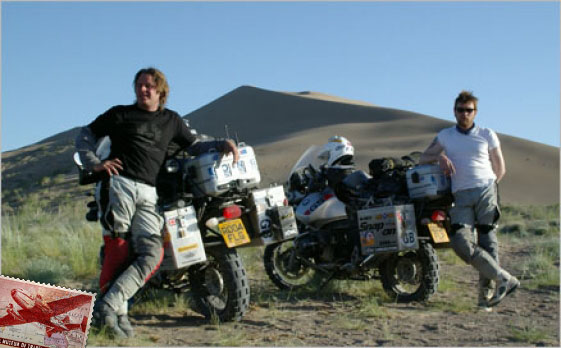 From 14 April 2004 to 29 July 2004, Ewan McGregor, Charley Boorman, motorcycle riding cameraman Claudio von Planta, along with director/producers David Alexanian and Russ Malkin, travelled from London to New York City via Western and Central Europe, the Ukraine, Western Russia, Kazakhstan, Mongolia, Siberia and Canada, over a cumulative distance of 18,887 miles (30,396 km). The only sections not undertaken by motorcycle were the 31-mile (50 km) passage through the Channel Tunnel, 580 miles (930 km) by train in Siberia to circumvent the Zilov Gap, several river crossings and a short impassable section in eastern Russia undertaken by truck, and a 2,505-mile (4,031 km) flight from Magadan in eastern Russia to Anchorage, Alaska.

The riders took their BMW motorcycles through deep and swollen rivers, many without functioning bridges, while travelling along the Road of Bones to Magadan. The summer runoff from the icemelt was in full flow and the bikes eventually had to be loaded onto passing trucks to be ferried across a few of the deepest rivers.

The journey passed through twelve countries, starting in the UK, then through France, Belgium, Germany, the Czech Republic, Slovakia, Ukraine, Russia, Kazakhstan, Mongolia, Canada, and the USA, ending in New York City.

The team stayed mainly in hotels while in Europe, North America, and the more populated parts of Russia, but frequently had to camp out in Kazakhstan and Mongolia. They visited various sights and landmarks en route, including the Church of Bones in the Czech Republic, the Mask of Sorrow monument (described as the "Mask of Grief" in the show) in Magadan, and Mount Rushmore in the USA. They arrived in New York on schedule, and rode into the city accompanied by a phalanx of bikers including McGregor's father Jim and the Orange County Choppers crew.