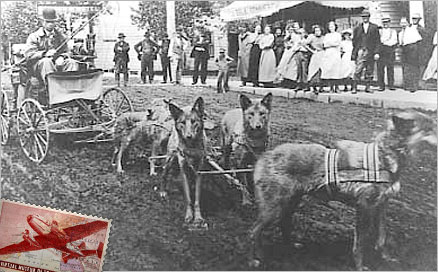 William Brown, globetrotter extraordinaire accompanied by a New Foundland dog a female wolf and pup, arrived in the city at about four o'clock Tuesday afternoon and registered at the Myers house, where he spent the night. Brown, who is about thirty years old and talks with a slight German accent, is from Nome, Alaska. He left that territory six years ago on a $10,000 wager that he would traverse 25,000 miles in the United States, either by foot or by means of a sledge pulled by his animal companions, the sale of souvenir postcards of himself being his only means of sustenance and return within seven years with either the same wolf or one of her pups in his possession. He has already made 23,000 miles and will complete the entire distance at Seattle, from where he will board a boat homeward bound to claim his stake, presumably in next June or July. The strange combination renewed their journey at seven o'clock this morning, bound for Marshfield. From there they will go to Mellen and thence straight across the country to the coast. Both the man and the beasts appeared to be in fine health and spirits. If anything the man was in the better condition. It is Brown's intention to hitch the dog and the big wolf together to a sledge when snow falls, this being tried previously with good results.