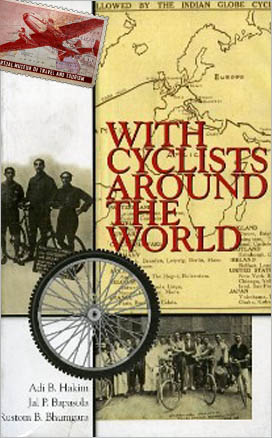 Around the world bicycle trip memoirs to be released after 80 yrs
Vadodara, April 18 - One of the three men was a Barodian; almost 80 years after it was first published, his son will release a new edition of the book today
Just in their twenties and living off a shoestring budget, three young Parsis, one from Baroda, ventured on the first ever trip around the world on bicycles on October 15, 1923. The trio covered 44,000 miles in three years and three months across 27 countries and four continents. On their return, Adi Hakim from Vadodara, Jal Bapasola from Mumbai and Rustom Bhumgara from Pune, who later became a freedom fighter, wrote a book of their memoirs from the epic journey, of which but a few copies still exist. The original book includes a foreword by Jawarharlal Nehru and comments from leaders around the world like Benito Mussolini and Calvin Coolidge.”
Now, after five years of labour and commitment, Hakim’s son Daryous will release a new edition of the book in Vadodara on Saturday, almost 80 years after it was first published.
Says Daryous, who is fondly called Dara: “The original line-up of cyclists was six, but only three completed the tour, with three others returning to India for various reasons. In their book, the trio believed they wanted to take India to the world, even as they were caught up in the fervour of the freedom movement.” He says the three were left with not much money and did odd jobs while travelling, for meeting their expenses for food, clothing and shelter. They decided on the trip after meeting at the Mumbai Weightlifting Club, he says.
Dara and his wife Roda began their own quest to re-publish the epic memoir in 2003. “Talking to my six brothers in the early nineties, I realised that all of them did not even have a copy of the book and neither did many of the grandchildren,” says Dara.
But as Roda says, not everybody seemed interested in the book till finally Delhi-based Roli Books agreed to publlish the book.
“Even then it took five years for the release of the new edition. It was a famous book when it was released sometime around 1928. But now we have no idea how many even exist. We believe this is a tale that people should know about,” says Roda.
“When the publisher agreed, it took a huge load off our minds, but it was more contentment than anything else. Strangely, My father-in-law and his friends returned from their trip on April 18, 1928,” says Roda.
She adds that they even managed to get in touch with the families of Jal Bapsola and Rustom Bhumgara mostly through the Internet and Parsi magazines. “They seemed even more excited about the release as even they had but few copies of the book,” Roda says.
Dara says it was the spirit of adventure in the book that inspired him to join the Indian Navy in 1951. “It is written in a very witty style full of awe of an unseen world. After reading it in my teens I was enthused to join the Navy, where I served for 10 years,” says Dara, who left the services to pursue a career in management. The book will be released at the Godrej Hall, Parsi Dharamsala in Fatehgunj.
https://parsikhabar.net/history/around-the-world-bicycle-trip-memoirs-to-be-released-after-80-yrs/964/