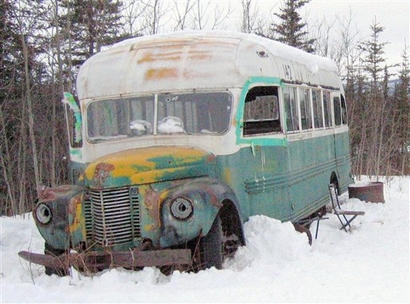 In April 1992, McCandless hitchhiked from South Dakota to Fairbanks, Alaska. He was last seen alive at the head of the Stampede Trail on April 28 by a local electrician named Jim Gallien, who had given McCandless a ride from Fairbanks to the start of the rugged track just outside the small town of Healy. Gallien later said he had been seriously concerned about the safety of McCandless (who introduced himself as "Alex") after noticing his light pack, minimal equipment, meager rations, and obvious lack of experience. Gallien said he had deep doubts about "Alex's" ability to survive the harsh and unforgiving Alaskan bush.

Gallien tried repeatedly to persuade McCandless to delay the trip, at one point offering to detour to Anchorage and buy him suitable equipment and supplies. However, McCandless ignored Gallien's persistent warnings and refused his offers of assistance (though McCandless did accept a pair of Xtratufs, two sandwiches, and a packet of corn chips from Gallien). Gallien dropped McCandless off believing he would head back towards the highway within a few days as hunger set in.

After hiking along the snow-covered Stampede Trail, McCandless came upon an abandoned bus (about 28 miles (45 km) west of Healy at 63°52′5.96″N 149°46′8.39″W) alongside an overgrown section of the trail near Denali National Park. McCandless, according to Into the Wild, attempted to continue "heading west until I hit the Bering Sea." However, he was deterred by the thick Alaskan bush and returned to the bus, where he set up camp and lived off the land. He had 4.5 kilograms (9.9 lb) of rice, a Remington semi-automatic rifle with 400 rounds of .22LR hollowpoint ammunition, a number of books, including one on local plant life, some personal effects, and a few items of camping equipment. Self-portrait photographs and journal entries indicate he foraged for edible plants and hunted game. McCandless hunted porcupines, squirrels, and birds, such as ptarmigans and Canada geese. On June 9, 1992, he illegally stalked and shot a moose. However, the meat spoiled within days after McCandless failed in his efforts to preserve it.

McCandless' journal documents 113 days in the area. In July, after living in the bus for a little over two months, he decided to head back to civilization—but the trail was blocked by an impassable Teklanika River swollen with late-summer runoff from the Cantwell Glacier: The watercourse by that stage was considerably higher and swifter than when he had crossed in April. McCandless did not have a detailed topographical map of the region and was unaware of the existence of an abandoned hand-operated cable car that crossed the river 1⁄2 mile (800 m) downstream from where he had previously crossed. At this point, McCandless headed back to the bus and re-established his camp. He posted an S.O.S. note on the bus stating:

Attention Possible Visitors. S.O.S. I need your help. I am injured, near death, and too weak to hike out. I am all alone, this is no joke. In the name of God, please remain to save me. I am out collecting berries close by and shall return this evening. Thank you, Chris McCandless. August?

McCandless' final written journal entry, noted as "Day 107", simply read, "BEAUTIFUL BLUE BERRIES." Days 108 through 112 contained no words and were marked only with slashes, and on Day 113 there was no entry. The exact time and date of his death are not known. Near the time of his death, McCandless took a picture of himself waving while holding a written note, which read:

I HAVE HAD A HAPPY LIFE AND THANK THE LORD. GOODBYE AND MAY GOD BLESS ALL!

On September 6, 1992, a group of hunters who were looking for shelter for the night came upon the converted bus where McCandless had been staying. Upon entering, they smelled what they thought was rotting food and discovered "a lump" in a sleeping bag in the back of the bus. The hunters quickly radioed police, who arrived the following day. They found McCandless' decomposing remains in the sleeping bag. It is theorized that he died from starvation approximately two weeks before his body was found.