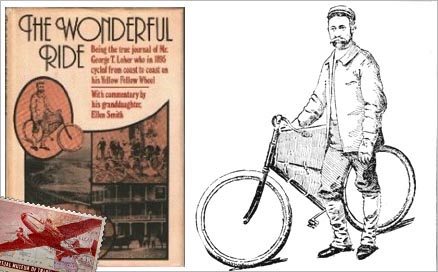 The ACME cyclist back
George Loher, who went from Oakland to New York on his wheel.

Much interest was shown to-day at the Acme Club over the tour of George Loher, who arrived home yesterday from New York, to which city he went on his wheel. Loher's trip was one of the most arduous and difficult ever undertaken. Instead of riding from ocean to ocean by the most direct and accessible route, as all previous cross-continent riders have done —with the exception of Tom Winder— Mr.Loher preferred to take his way over some of the wildest and roughest portions of the country. He left Oakland on August 11 in company with a friend named Cornell, but his companion turned about at Sacramento and came home. Loher skirted the Pacific Coast to Portland, and then made his way East through Idaho, Montana, the Dakotas and Minnesota, to Chicago, from which point he followed the beaten track of travel to New York, where he arrived by October 30. The trip was not taken with any view of crossing the continent on record time, but nevertheless Loher's time over the most difficultportion of the route— that west of the Mississippi River —is better than Winder's for practically the same ground. The Acme man was eighty days in going; from ocean to ocean, but he made frequent stops along the way, so that only sixty-two days were consumed in actual riding, notwithstanding his roundabout line of travel. His way lay over some of the most difficult portions of the Rocky Mountain region, and no less than five mountain chains had to be crossed. Mr. Loher thinks he made a mistake in choosing to cross by the northern route, and recommends bicyclists to take another route. There are long stretches of mountain- climbing through the Spokane country and the Muiler Pass into Helena, Mont., but the scenery is some recompense for the labor. The wind-swept prairies of Dakota, through miles of sand, was not pleasant for cycling. After crossing the Dakota plains Loher entered a stretch of country in which everybody spoke Swedish and no one spoke a word of English. The cyclist traveled over 4350 miles of roads, trails and deserts, and has no intention of repeating the journey.
The San Francisco Call, 17.12.1895