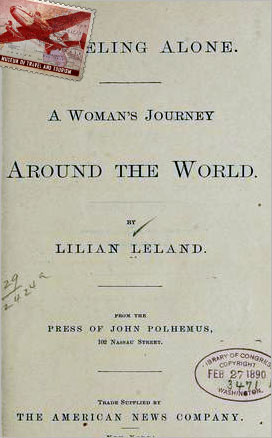 The successful accomplishment of a journey of nearly sixty thousand miles, made by a young woman, traveling alone, is calculated to excite wonder and admiration ; and when the record of that journey is replete with original thought, the emanations of a bright intellect, it possesses a special interest.

Lilian Leland, at the age of twenty-five, without premeditation or preparation, started upon a voyage which, unexpectedly, became the commencement of a journey which carried her around the world, to many lands and on many seas, from Cape Horn to the North Cape and from the Rocky Mountains to the Himalayas ; but little less than sixty thousand miles in distance and covering a period of about two years.

She traveled without escort or protection except chance acquaintances met on the way.

No woman has ever traveled so far alone, with the single exception of Ida Pfeiffer who went twice around the world. Next to Lilian Leland is Isabella Bird, whose admirable books have earned for her a well deserved fame.