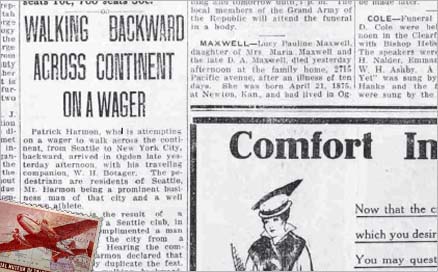 Walking backward across continent on a wager
Patrick Harmon, who is attempting on a wager to walk across the continent, from Seattle to New York City, backward, arrived in Ogden late yesterday afternoon, with his traveling companion, W. H. Botager. The pedestrians are residents of Seattle, Mr. Harmon being a prominent business man of that city and a well known athlete.
His venture is the result of a chance remark in a Seattle club, in which a friend complimented a man for walking into the city from a suburban town. Hearing the compliment given, Harmon declared that he could not only duplicate the feat, but could do it walking backward.
Further discussion led to the undertaking of his trans-continental hike backward, on a $25,000 wager, the time allotted the pedestrian being 260 days. Botager received $4 a day for going along and seeing that Harmon plays fair. The couple have been 49 days making the trip from the Pacific coast to Ogden and is ahead
of schedule. Harmon walks with a looking glass attached to himself at an angle that permits of his seeing the road behind him.