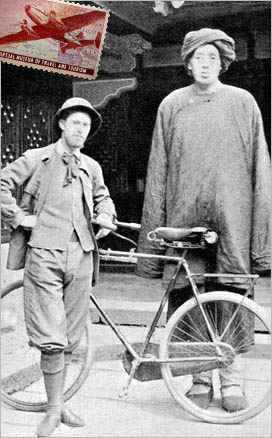 We took this trip round the world on bicycles because we are more or less conceited, like to be talked about, and see our names in the newspapers. We were stoned by the Mohammedans because they alleged we were Christians, and we were pelted with mud in China because the Celestials were certain we were devils.We slept in wet clothes, subsisted on eggs, went hungry, and were enforced teetotalers. We had small-pox, fever, and other ailments. There were less than a dozen fights with Chinese mobs. We never shaved for five months, and only occasionally washed. Our adventures therefore were of a humdrum sort. If only one of us had been killed, or if we had ridden back into London each minus a limb, some excitement would have been caused. As it was we came home quietly.