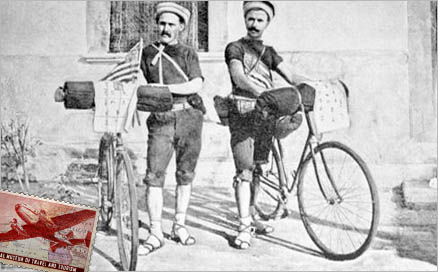 The boldness and courage that Thomas Allen and William Sachtleben display in this book is impressive. On June 14, 1890, just one day after they graduated from Washington University in Saint Louis, Missouri, they set out on a record -breaking journey around the world. As they put it, they did it hoping to add practical experience to the book knowledge they had acquired in college. As they traveled, they hoped to meet the people of the world face-to-face, unhindered by protective tour guides and luxurious accomodations. That's why in this book you will see them constantly scheming to escape the zaptiehs (guards) that local leaders force upon them. It's also why they endure, with only modest complain, such utterly horrible living conditions.

As their primary means of travel they chose the then-new "safety bicycle". As they admitted, it wasn't because they were experienced bicyclists. At that time, few people were. Earlier forms of the bicycle had been awkward and dangerous. With its two equal-sized wheels, chain-driven rear wheel, and inflated rubber tires, the safety bicycle was such a dramatic improvement that virtually all present-day bicycles follow its design. In a sense, the 300 million bicycles now in China owe their existence to these two young men who first demonstrated the advantages of a "little mule that you drive by the ears and kick in the sides to make him go".

The inspiration for their journey was apparently Thomas Stevens then popular two volume, 1887-88 work, Around the World on a bicycle. (Stevens bicycle had been what was then called the ordinary design, wich precariously poised its rider some six feet in the air atop a giant wheel). Parts of their route were similar to that of Stevens, but they were proud of the fact that they succeeded at the very point where Stevens failed. Legal and visa difficulties forced Stevens south through India rather than along the more adventurous route Allen and Sachtleben took through almost lawless regions where Russia and China were then vying for power.

This book covers the most interesting part of their 15'000 mile, round-the-world trip. It leaves out the 8'000 miles they traveled (like Stevens) across Europe and United States and focuses on their 7'000 mile trip through Asia from Constantinople (Istanbul), then the political center of the Near East, to Peking (today's Beijing), capital of the most populous nation in the Far East. In 1895, just two years after they returned to the United States, another cyclist, Frank G. Lenz (1867-94), was murdered while attempting repeat their adventure.

Allen T., Sachtleben W., Across Asia on a bicycle: the journey of two American students from Constantinople to Peking, Inkling Books, 2003