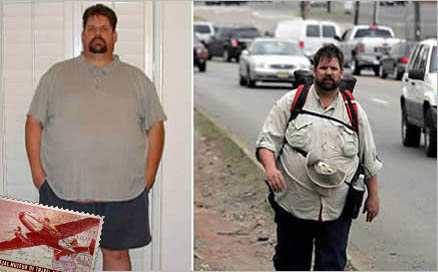 NEW YORK (CNN) -- Steve Vaught, the self-proclaimed "Fat Man Walking," arrived in New York on Tuesday after a nearly 3,000-mile walk across the country to lose weight and find happiness.

When he left Oceanside, California, about 13 months ago, he weighed 410 pounds. Vaught, 40, was suffering from depression that had worsened over the years since he killed two pedestrians in a car accident when he was 25.

He ended the journey about 100 pounds lighter. Vaught spoke with CNN's Soledad O'Brien on Wednesday.

O'BRIEN: How was it to cross over the [George Washington] bridge and finally make it?

VAUGHT: It was pretty exciting. It was kind of funny.

You know, it started to rain a little bit. And the media were following me around and running into poles and tripping over one another. And I thought -- I go 3,000 miles and then I get a bunch of people hurt at the end.

O'BRIEN: Oh, don't worry about the media. They always run into poles.

You began last year, as we all know because we've been following your story and telling your story. You weighed 410 pounds. Give me a little background as to why -- why you decided to take on a trek across the country.

VAUGHT: Well, for me, I had to figure out some way to conquer the problems that created the weight. I knew that it wasn't an issue of just losing the weight, because people do that all the time.

O'BRIEN: So it was more mental than, sort-of like, I'm going to walk across the country and lose some weight?

VAUGHT: Yes. It started out a little more basic, and exactly that. You know, I was thinking that if I walked across the country I'd lose weight and I'd be happy. And I learned along the way that you have to be happy first and then the weight just goes naturally as you start to, you know, not rely on food as comfort.

And that's what I needed to do. I needed to make a drastic change in my life, and that sometimes takes drastic steps.

O'BRIEN: You gained some weight toward the end. And I'm curious to know, because, of course, when you walk along the highway, what you really have as choices to eat, it's kind of junk food.

VAUGHT: It is. It's mostly junk food, in fact. Mostly fried, you know, battered, gravy. It's not...

VAUGHT: It's good. Well, that's why they sell it, because people buy it. And -- but it's not that good for you.

But in the end, I sort of started to not even follow my own direction, and I got a little over zealous. And I was eating probably 80 percent protein, 20 percent carbohydrate, and I actually made myself kind of sick. So, on doctor's orders I had to switch up a little bit, and I put on about 10 or 12 pounds.

O'BRIEN: You wanted to quit a couple of times, I read.

VAUGHT: Yesterday I wanted to quit a couple of times.

VAUGHT: Every day. No, every day you wake up, and even if you're, you know, that close, you still say, oh, 10, 15 more miles? But that's where the lesson is. The lesson is in overcoming the hardship, overcoming the adversity.

So, the point is, every day you want to quit, but you don't. You understand that you still have to go. So you feel sorry for yourself for a little bit, and then you say, OK, now I have to go.

O'BRIEN: I've got to ask you about some of that adversity, as we've been talking about. When you were 25 years old you were in a car accident.

O'BRIEN: You took the life of two elderly pedestrians. It was an accident. You couldn't see them.

VAUGHT: No, I didn't see them.

O'BRIEN: And how much of that played a role in sort of exorcising the demons, maybe, in this walk?

VAUGHT: You know, the -- when the accident occurred, the change was so gradual I didn't notice it for quite a while. But it actually changed my life completely, and it really -- it made me very depressed, and that makes your world close up. And I started to gain weight, and it became even smaller.

And by the time I got to the point where I was going to go on the walk, I was really -- you know, my outlook was very, very dim. And being on this walk, I've just learned so much and I've met so many great people and changed so much that it's just profoundly changed me, I think, for the rest of my life.

O'BRIEN: And a wife as well. I know you guys had a little bit of trouble along the way.

O'BRIEN: And I think I read that you're -- she's filing for divorce.

O'BRIEN: But you're still good friends.

O'BRIEN: The family's not here?

VAUGHT: No. It was going to be too expensive to bring them out. We really wanted to, but, no, it just didn't work out.

O'BRIEN: New York City is such a rip-off. It's all expensive -- please. I could have told you that when you were back in Ohio or something.

O'BRIEN: ... what do you think the lesson is for the kids and the family?

VAUGHT: Never give up. My daughter took a phrase that I told her. I don't even remember when I told her, but she was asking me about learning to fly. She wants to fly without the aid of an aircraft.

VAUGHT: She wants to physically fly. And she told me that she didn't think it was impossible. And I told her nothing's impossible. It just hasn't been figured out yet. And that's the thing that she keeps reminding me, especially at the low points.

She's sort of become a bit of a coach. And, you know, the fact that she's so proud and she's so, you know, strongly behind me, it really helped me keep going.

O'BRIEN: I was told to ask you, are you going to walk back?

VAUGHT: No. I'm not even walking to the hotel. Are you kidding?

O'BRIEN: Maybe the guys will carry you back to the hotel.

VAUGHT: I'm good for walking for a while.

After several years working as a presenter and interviewer for BBC Radio 4, Vernon's first travelogue series was Fat Man On A Bicycle. As the title implied, Vernon was obese and the first episode followed the health tests he had to undergo before setting off on his journey, which took him from Muswell Hill to the Mediterranean coast of southern France. He would repeat this journey fifteen years later for the TV series, Fat Man in France.

Fat Man at Work and his first television series, Fat Man in the Kitchen, deviated from the travelogue style of the other series. The former featured Vernon talking to people working in factories, while the latter was a cookery programme filmed in his own kitchen in Muswell Hill in which each edition was devoted to cuisine of a different country. 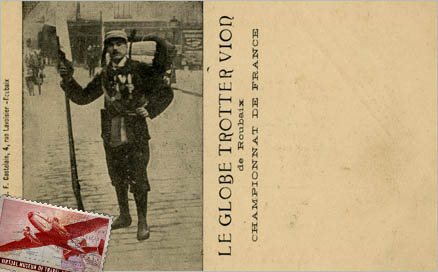