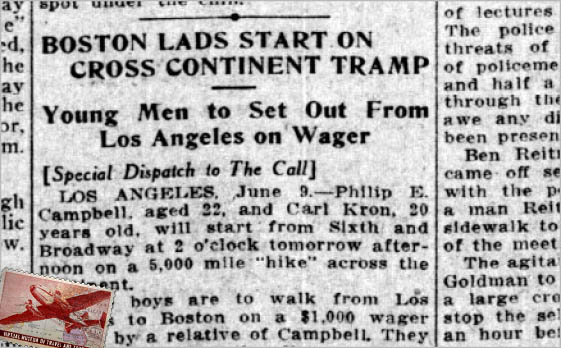 Young Men to Set Out From Los Angeles on Wager

LOS ANGELES. June 9 - Philip K. Campbell, aged 22, and Carl Kron, 20 years old, will start from Sixth and Broadway at 2 o'clock tomorrow afternoon on a 5,000 mile "hike" across the continent.
These boys are to walk from Los Angeles to Boston on a $1,000 wager offered by a relative of Campbell. They are to walk the entire distance in 180 days. They will go by way of Sacramento, Salt Lake, Pueblo, Colorado Springs, Denver, Lincoln, Omaha, Chicago, Cleveland, Buffalo, North Adams and end their long tramp at Campello, Mass.
Campbell visited the city hall yesterday to got credentials from Mayor Alexander. he says he has taken several lons tramps, the last one being from Spokane to Los Angeles. His weight was reduced from 150 to 128 pounds on this trip.
Both Campbell and Kron are Boston lads.
The San Francisco call., June 10, 1912