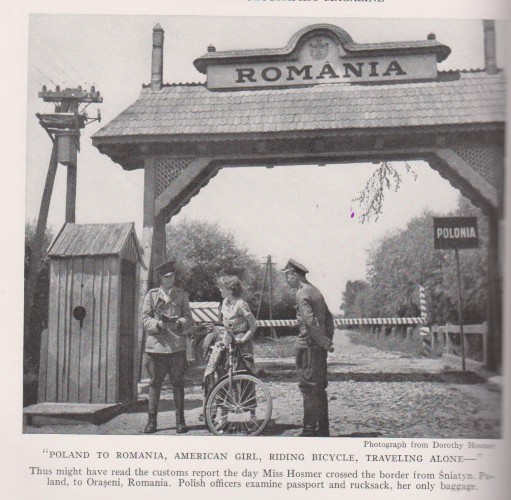 Dorothy was born in Wauwatosa Wisconsin, then a town with a population of 3,346.

There's very little information available on her family background but they obviously moved around the U.S. because she completed her primary education in Wilmete, Illinois and her high school years in Sarasota, Florida. There followed a college year at Rice Institute (later to become Rice University) in Heuston, Texas. and a further year at a secretarial college in New York before working for a bank there.

In 1936 she bought a trans-Atlantic liner ticket for $89 and travelled to Europe on the SS President Roosevelt intending to spend a few months 'seeing Europe' before continuing on to India and the Far-East.

But en route she changed her plans, as told in her own words;

"Eight days of the lazy life on board ship did more than put an ocean between the boat and New York. It instilled in me the conviction that travelling was something you had to take as it came along if you wanted to get anything out of it. Hence on the evening before landing I threw my itinerary to the winds and decided to cycle from Geneva to Trieste.

That spur-of-the-moment decision led me from one adventure to another in my zig-zag route across the face of Europe. Fortunately it was a process of gradual education, so that by the time I reached the Balkans and understood the attitude toward girls without chaperones, I had become better able to cope with the inevitable misunderstandings."

In the Summer of 1937 Dorothy was in Vienna Austria when she received a letter from a friend who was visiting the city of Kraków in southern Poland, urging her to come with her camera as in his opinion it was the place for photography. She followed his advice and after a number of weeks in Kraków decided to obtain a bicycle and continue her travels south-eastwards to Zakopane on the border with Czechoslovakia. Her ultimate goal was the Black Sea. Then by bicycle, train, river transport, horse and finally by bicycle to the Romanian border. This journey was to provide the material for her article published in the June 1939 edition of National Geographic Magazine.

Continuing on into Romania she found the same rich ethnic mix, Gypsy, Jew, Ukrainian, Hungarian, that showed the artificiality of man-made borders. This cycle tour was no mad rush but a leisurely meander with frequent side diversions and the occasional train ride. Dorothy spent five weeks in Transylvania being passed from one Hungarian noble family to another staying in castles. Other times, in remote areas, she was content to stay in peasant cottages or student dormitories. By late October 1937 she reached Bucharest and with the fast approaching Winter resolved to delay the rest of her cycle tour till the Spring of 1938. This part of her tour was chronicled in her article 'An American Girl Cycles Across Romania' published in November 1938.

In late 1937 Dorothy wrote an unsolicited letter to National Geographic asking if they would be interested in publishing her travel writing and photographs. They must have got hundreds of such letters from hopefuls over the years but for some reason they decided to accept hers. The account of the Romanian leg was the first to appear in November 1938 and then in June 1939 'Pedaling Through Poland' was published. She wasn't the first female photographer to have her work published in the magazine but it was still unusual at that time and there was some editorial resistance as it was seen as not 'the done thing' for young American women to be cycle touring Europe alone.

With the outbreak of war in Europe in September 1939 the situation changed drastically but after the fall of France and the entry of Italy into the conflict in June 1940 the situation for neutral nationals like Dorothy Hosmer became critical. Not surprisingly she returned to the U.S. in July 1940, travelling eastwards by sea through the Suez Canal on a French passenger ship more than likely bound for Saigon in French Indo-China.

In their March 1940 issue National Geographic published a third article by Dorothy, 'Caviar Fishermen of Romania, from Valcov, "Little Venice" of the Danube Delta, bearded Russian exiles go down to the sea'.

Then in April 1941 her fourth article 'Rhodes & Italy's Aegean Islands' was published.

On the death of her father in 1943 Dorothy moved to Mexico where she worked for a time at the Office of Inter-American Affairs in Mexico City. In the Summer of 1945 she visited Guatemala and on return to Mexico visited the artist community of Ajijic on the northern shore of lake Chapala. Her photo-essay 'Village in the Sun' about Ajijic was published in 'Modern Mexico' in 1946.

Returning to the U.S. in December 1945 she spent 1946 marketing her photographs while taking a one year course at Columbia University in writing children's books.

Dorothy Hosmer married Frederick Lee in Puerto Rico in 1949. In July 1950 their son (Kerry) was born, also in Puerto Rico so it's likely they were living there. Kerry Hosmer-Lee died in Alameda CA. in February 1982.

After her husband died of cancer she moved to Redlands California and worked as an Educational Adviser for the U.S. Civil Service Commission at Norton Air Force base in San Bernardino until she retired in 1971. Dorothy travelled extensively in her later years.