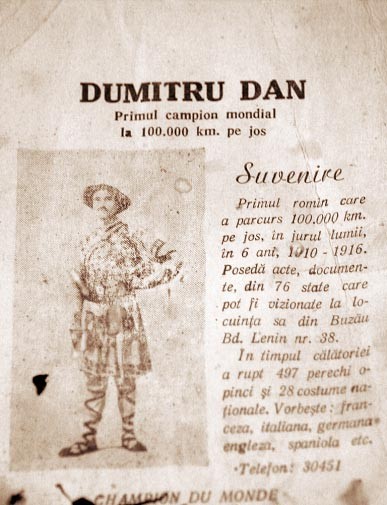 In 1908, the Touring club de France announced a contest for walking around the world, with an offered prize of 100,000 francs. Dumitru Dan and his countrymen Paul Pârvu, George Negreanu and Alexandru Pascu were all students in Paris at the time, and they decided to take up the challenge, using their own money and resources.
The group returned to Romania to prepare, learning additional languages, studying cartography, and doing weight training and exercises for two hours a day. They also walked 45 km per day, travelling plains, hills and mountains in all seasons. They had learned Romanian folk songs and dances and also to play the flute and accordion so that they could support their endeavor along the way by performing their native folklore.
In 1910, wearing native garb and walking in sandals, the group set out on their voyage with a dog, Harap. Much of the route was covered between 1910 and 1916, but Dan's companions did not survive to see the trip's completion in 1923.

Death of fellow travelers
On 17 July 1911, in India, the group were invited to the palace of the Rajah of Bombay. After sharing a meal there, the walkers went in group to purchase supplies for their journey in town. Alexandru Pascu remained to tell the Rajah about their adventures to that point. His companions returned to find Pascu and their hosts had indulged in and passed out from opium. Although their hosts felt Pascu would likely recover, he never woke. He died as a result of opium poisoning and was buried in India.
George Negreanu died two years into the voyage, when the then trio were crossing a narrow mountain pass in the Nanling Mountains in China. In a brief rain during which they were forced to feel their way with canes, Negreanu - at the head of the group - fell onto rocks from a sharp precipice. Dan and Pârvu carried him to a local settlement and then to a hospital but there was no doctor available there to assist. By the time medical care was found, Negreanu was dead.
Pârvu found himself unable to continue in Jacksonville, Florida.[2] Several years earlier, he had wounded his legs during the more than 2600 km walk across Alaska (coming from China and Siberian Russia) on the route Kotzebue, Fairbanks, Anchorage, Yakutat, Gustavus, Skagway and Juneau, and he developed gangrene. Advised by doctors to stop, he remained in Florida with the dog Harap. Subsequently, both of his legs were amputated, but it was not sufficient to save him. In May 1915, he died.
Dumitru Dan was forced to put his trip on hold due to the outbreak of World War I, but he completed his voyage by 1923. The value of the prize was substantially diminished, given inflation over 15 years and from the War. According to a 2011 Romanian news article, it had been worth about 500,000 Euros in 1908, but was only worth 40,000 at the time it was awarded. He crossed five continents over three oceans, through 76 countries and over 1,500 cities, wearing out 497 pairs of shoes.
https://en.wikipedia.org/wiki/Dumitru_Dan

Based on the 1914-1915 newspaper stories found and his surviving documents, it is concluded that Dumitru Dan actually started his true walk alone in Paris, in February, 1914, and continued walking through 1914 and 1915, but only walking in Europe and North America. All claims before 1914 that he went to Russia, Persia, Africa, Asia, Siberia, Alaska, South and Central America were sadly fictional stories he added years later, probably to increase his reputation and to make interesting lectures and lessons. He may have walked some in Europe, in 1912, before he served in the Balkan War later that year. He did indicate in 1914 to some newspapers that he started his walk in 1912, went to war, and then resumed his walk in 1914. But no 1912 certificates survived.